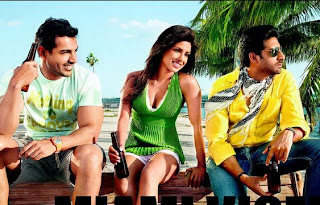 I went for the "Talk of the town" movie, Dostana at inox this week, infact i wanted to watch the movie along with my boyfriend Arjun, but i couldn't becoz he went to visit his cousins in mumbai. Instead i went alone for the movie.

At first i thought it might be a hot idea going alone for this gay themed movie (i was expecting so many bi-sexuals and bi-curious guys to be present there, so that i could pick one hot guy). but then i felt bit awkward being there alone watching a comedy movie, but well... the movie was really entertaining. i guess its the first indian movie with a gay theme and also star studded like John Abraham, Abhishek and Priyanka (5 years we wouldnt imagine such a movie in india)
Then ofcourse John , surely he is one of the sexiest guy in the world, with that yellow briefs, show offs of his butt and bare chest, he is simply awesome, i can even hear some of the guys in the theatre whistling when he appears on the screen. The chemistry between John and Abishek worked really well. Though iam gay i must mention about Priyanka's sexy smile( she got that indian sexy looks, i guess so many guys would have dreamt of her that night).

The movie is infact good, dealing about friendship and triangle love like other Karan Johar's movies, but with a gay touch and humour (i hope gays dont take it as personal insult for some of the scenes). And Karan infact did one good favour ending up the movie with an anti-climax showing the transformation of John and Abi into liking each other and remembering the kiss.
I was fortunately sitting next to some college guys from mumbai (it was an accident, i was not desperate to sit next, remember the seats cannot be chosen by us). All 5 of them are really hot. As usual i was counting my luck to find out ways to talk with them and get their phone numbers (and i managed to get one, lucky?). And i spoke to that guy, his name is Abishek too.
I felt some of the gals and most of the guys were watching me in the break time (They might thought iam another John?). And i was wondering whether really i came to watch this movie or wanted to make a statement in the public. I guess i wanted to do both. It was clear statement to the people their that i am gay by walking in alone (i was also wearing a T-shirt saying "Iam different, i live alone and My world is Mars").

This is the first time iam openly stating in public "Iam Gay". And infact the guys who sat next to me became my friends now, and they said they have guessed me that i am a gay (I dont have any single sign on gay looks in my body, iam a straight looking gay). After the movie i went to Elliot's beach and felt happy and relaxed. i felt i did something which i wanted to do for a very long time , i took a long breath and came home. i called Arjun on the phone and spoke to him about the day.

Note: i know that you guys wanted to know what happened with that mumbai guy sat next to me...well i dated one guy ,Abishek