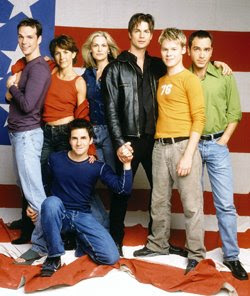 Sunday evening has always been a bit of dull, lazy and boring for me. So usually dedicate saturdays for my parties or datings and sit at home or spend a leisure time on sunday evenings. Well,There are better ways to spend your time if you have decided to stay home like books, movies , internet etc.

Today i started of my leisure time a bit early in the afternoon, its been quite sometime i have watched "Queer as folks(QAF)". so i have decided to watch it once again (i guess 77th time).i bought the whole album at spencers too in January, since then i am watching, watching and watching all over again. People who have not seen QAF ,should watch it right away (so just move your lazy butt and rush to the store to buy).

For gays QAF is kind of bible, it is a kind of mega-seriel (plz dont compare this with our Sun tv serials). The Seriel has been broadcasted all around the globe( nearly 40 channels) and taken in both US version and UK version with different actors ofcourse. it has 6 Chapter each carries nearly 15 episodes( each episode runs for an hour). QAF is all about 4 friends who are gays and their circle of friends. it talks about gay sex, lesbian ,hetrosex, drugs, AIDS , gay lifestyle, gay rights etc.

So here is the plot: The story centered around two childhood friends Michael and Brian, who are in their 30's. It shows the passionate friendship between these two gays, their boyfriends, their lifestyle etc. The story also includes the other characters like Emmett who is a roomate of Mike , Justin who falls in love with Brian , Ted who is an aging accountant and gay, Lindsay and Melanie ,lesbian couples who are friends of Brian and Ted, Mike's mother who involved in gay activism, Ben who is college professor and also mike's boyfriend and their adopted son who is a HIV positive.
The story starts with Mike narrating the story about their friends especially Brian whom he have a secret love. Brian is the hero of the whole story who dont believe in love and goes for one nite stands. He is the hot guy in Pittsburgh and also a successfull advertising agent.

Why i said it is a gay bible because it not only a story between gays, it is also discusses and showcase all the gay issues like AIDS, safe sex, career, family approval, life style, costumes etc.(Gosh, i dont think they left anything to show including toilet, cars , babies etc). And i dont want to forget about all those hot looking actors like Brian, Justin , Michael ,they are simply awesome looking and astounding acting display.

So guys if u r not going to watch it ,u r really going to miss something in your life....

Note: My sister found one of the QAF dvd from where i was hiding , well it actually let me told her about my sexuality, atleast one person now accidently known about me.
Posted by Chennai Dost at 6:54 AM