On Monday night i came home early, i was so bored as usual so i went to this video shop in Besant nagar which is nearby ICICI bank. Earlier i used to go to their another branch which is in Gandhi nagar, Adyar. But now they have closed this shop in adyar, so i had to go Besant nagar. One good thing about this video shop is you can find plenty of gay themed movies here. They might have more than 50 movies as such. Here is some of the movies i have seen recently

The quality of the movies are really good. So this time i took 2 movies Milk and Straight and i have watched it. The Oscar winning movie Milk really deserve an Oscar especially the Sean Penn. If any of you guys who havnt seen it yet must straight away go to your nearby video shop and get it.

Milk is a movie about a Gay Rights activist Harvey Milk who lived in 70's in United States. Harvey is a middle aged man who was earlier working for an Insurance company, then shifted to San Francisco along with his cute boy friend Scott. They both open a small shop there and started involving in Gay rights activities. Harvey realizes that only by gaining administrative power in the government he'd be able to acheive his goals, so polls in elections. After a long struggle and few failures finally Harvey was elected and chosen to represent the city. Harvey had an opponent in the representative house named Dan White, who is a homophobic. Finally after achieving some of his goals like no gender discrimination for public jobs etc Harvey Milk was shot dead by Dan White. 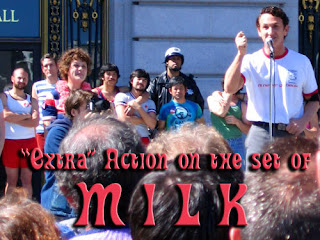 Though the movie is a biography but it was filmed beautifully, especially the first meeting between Milk and his lover Scott in the subway, Milk responding to media, Debating with politicians on gay issues etc. In one such debate Milk's opponent said that the gay teachers are preaching homosexuality to kids which might make turn the kids into gays, to which Milk asked his opponent "How can you teach homosexuality, like you teach French?" and "I was born for hetrosexual parents, taught by hetrosexual teachers, can you tell me why iam still gay?", he continued "Nobody becomes gay, nobody can teach homosexuality, we are born with it"...(well, its true). The movie is an eye opener for those hetrosexuals who thinks that homosexuality is just about sexual convenience or like a fashion statement. The movie showcase the hard struggle for gay freedom in 1970's. No freedom or rights been achieved without struggle or fight. . He said in the movie that unless untill gays come out of their closet, they will live like a third grade citizen without basic rights to live their life (i truly agree). 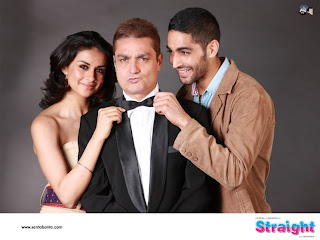 In contrast, i have seen another gay theme movie which is ofcourse a Hindi Film, Straight. Straight is a stupid gay stereotype movie which talks about a straight guy who thinks he is gay. When he hires a beautiful indian girl and a handsome punjabi guy in his restaurant, he thinks both are in love with him. When the punjabi guy kisses him in his restaurant suddenly he thinks he is actually gay, but he is not. Finally the straight stupid release a sigh of relief when he finds out he is straight and in love with the beautiful girl. Normally in Hindi movies, the bad guy will be a dark skin guy, with unbrushed hair, big moustache or beard, with an ugly voice. But here in Straight it is the homosexuality which plays a bad guy role. Though the director is a women and she tried her best to portray the movie as a gay supportive but she still cant resist it from being gay stereotype, once again another Hindi movie making jokes about gay. How long will Bollywood continue to do this...Dostana, Fashion and now Straight, personally i dont see any difference...Long live Bollywood.

Funny Note: Somebody sent me a link recently to let me find out whether iam gay or straight. It is a quiz, at the end of the quiz it will show a result and tell you if you are a gay or straight. The funny part is that the quiz adjudged me as pure straight...Somebody should straighten up this quiz master please...Link http://specials.rediff.com/getahead/2009/mar/02quiz1-male-straight-or-gay.htm