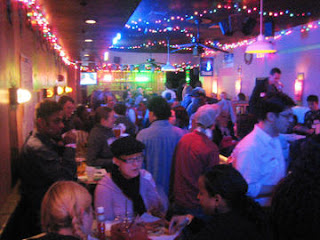 The hype about the event was all over and I personally experienced it when I had to take back to back calls. I was worried that I shouldn't be late like last time and I left home by 3:00 P.M. At times it is annoying to miss a bus and a train which eventually happened on the blessed day. I stay near Tambaram which is pretty remote from the City from my residence i had to take a bus to Velacheri and from there a train to Mylapore. While in the train I was observing the crowd and wondering "will that guy be in the event". I was brought back to senses by a call from Frank ( name changed to protect identity). Frank had already reached Citi Center and was bored as he was alone with hundreds of unknown faces around him. Isn't it true that even though we are not alone... WE ARE ACTUALLY ALONE. Alone among our family, alone among our relatives and alone among our colleagues. So I called Tanush( name changed to protect Identity), gave Frank's number and asked Tanush to find him as Tansuh was also waiting in Citi Center.

When I meet up with them I was even more clear as to what Chennai Dost targeted at, bringing the community together. When we reached I was surprised to see Uma a mutual friend of Teja and I there with another friend both of them Straight and have come to support us. There were also many new faces waiting for the event to start and some known ones like Annirudh(The Shakti Center), Ramki(SAATHI), Kalki(Sahodhari Foundation), Olga and Magdalene( Center for Counseling) who provided the center for the event. For the first time I met Rajesh and Meraj about whom I have heard a lot many a good things. I really admire those two for the support they have given for the group and the community.

Senthil was the host for the day and as soon as I reached we had to run through the whole agenda for the day.

We started with the first event the ice breaker "Hot seat" by 6:00 p.m. which was a fun session. Some of the lucky ones to be on seat were Olga,Srivath,Senthil,Sharanya,Frank,Tanush and Shyam.

Then Vikranth the Director of "Chennai Dost" and "Chennai Pink" addressed the crowd and answered their queries like "What is Chennai Dost", " Chennai Dost's Aim", "Whom does Chennai Dost Target at". Anyways to give a clear picture about Chennai Dost Chennai Dost is a non-profit LGBT welfare organization in Chennai to strengthen and unify the LGBT community.

Gnyani was the Guest of honor for the event and he addressed the crowd. He mentioned that the theater during the 70's itself staged a play called "ஏன் (Why)" which was about Homosexuality.


The Documentary "Rainbow" was screened at 6:30 p.m. Rainbow is a 22-minute bilingual documentary apropos to the first LGBT Pride Parade that took place in Chennai on 28th June 2009, It was produced and directed by Mohan Das Vadakara independent Documentarian. The documentary was clear and very expressive. I kept pausing in between to translate in English but after a point I realized that there was no need for me to translate it as the documentary was actually connecting to everyone.

We had a break at 7:00 p.m. and then by 7.20 p.m screened Shelter.The crowd were really happy about the movie as it spoke of family values, dependency,dreams,love and pain. The movie was about a guy who is forced to capitulate his dreams of art school and spends his life working and helping his compulsive and needy sister care for her son. Later falls in love and is forced to chose between his dreams and the needs of his family.

The event was a success we had more than 60 attendees which was a rally big number..

I personally would like to thank the core group for organizing it and the advisory board for supporting us..

Thank You
Posted by Ajay Gabriel Sathyan at 9:40 AM