The Movie Screening at Chennai Center for Counseling 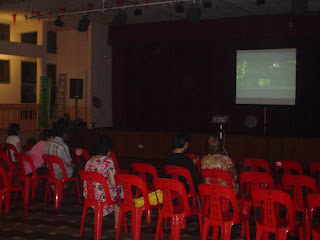 It was seven already and I was late for the Movie Screening, yes me being an active member it was preposterous and irresponsible of me to be late by one hour. I was worried that I was late and at the same moment relieved that I haven't actually missed a thing. To top it all I couldn't find the place and Teja had to fetch me and Senthil with a warm smile was there to welcome me.

As soon as I entered the center I was welcomed by a warm and benevolent Magdalene and rest of the happy cheerful crowd. We had to screen just one movie cause we were short of time and we screened "29th and Gay". Personally I connected to the movie for its intellectual values and I was worried looking at the crowd which contained a majority of youngsters but I was wronged. Remember the situation when you're glad that you're wrong...! I was in that situation. More than the movie I was engrossed with the crowd's reaction and I saw that they also connected.

In between the movie we had a tea break during which Magdalene gave a picture of what Center for counseling is; and from what I heard about her contribution to the LGBT community all I could is to relate to a context of that speech by Shakespeare mentioned in one of his famous play's King John which says

To guard a title that was rich before,
To gild refined gold, to paint the lily,
To throw a perfume on the violet,
To smooth the ice, or add another hue
Unto the rainbow, or with taper-light
To seek the beauteous eye of heaven to garnish,
Is wasteful and ridiculous excess.

The above means that her work communicates that the queer crowd are beautiful and perfect the way they are and that there is sans necessity for them to be altered or changed. Vikranth later talked about Chennai dost and the break turned into a short interactive session.

After the break we resumed watching the movie. The movie itself was a Mirror which communed the actual down to earth occurrences in a gay man's life but with a fantasy ending. It also taught a valuable lesson that "Life is to live and not to survive."

I was content that the screening was a success and wishing that the next coming event will be more interactive and productive.
Posted by Ajay Gabriel Sathyan at 12:57 PM