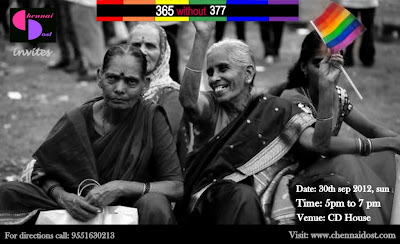 Chennai Dost invites you for the movie screening

(movie is followed by a discussion on sec 377)

Section 377 is a British colonial law from the Indian penal code that criminalizes same sex relations between consenting adults. When Delhi High court struck it down, the LGBTIQ community of India decided to celebrate this in a grand manner with colorful parades, songs and dances.

Adele tulli has not only captured the magnificient scenes of pride celebration, she has also interpreted the personal stories of the struggles of the three protagonists, Beena, Pallav and Abheena and how their lives have changed through entering the queer community as well as through the judgment. These characters , Beena, Pallav, Abheena travel through the city of Bombay heading to the celebrations for the first anniversary of the historic verdict.

“365 without 377” is the story of their journey towards freedom. The film truly makes you understand why it is so important to come out and be proud.

P.S: THE MOVIE SCREENING IS FREE AND OPEN TO ALL!!!


Are you feeling lonely and left out?

Do you fear about being discovered?

Do you have doubts and concerns about your feelings and emotions?
Talk to our peer counselor.

WE ARE HERE FOR YOU.

Chennai Dost offers FREE Peer Counseling Service for Gay, Bisexual men and women. This service can also be availed by gender queer individuals or individuals whose genders are in questioning. The LGBT Peer Counseling at Chennai Dost offers confidential one-on-one counseling and a safe space to discuss LGBT issues. Dealing with isolation and a lack of social support makes it difficult for some LGBT individuals to get the help and support they need when dealing with issues such as coming out, discrimination, marriage stress, confusion on sexuality or crisis over relationship. LGBT Peer Counseling cuts through this isolation and provides an outlet for LGBT individuals to feel comfortable about discussing their concerns.

The peer counseling service can be availed only on weekends from 12:00 PM to 6:00 PM on appointment basis.

Please call in advance to book an appointment. @  8056116158 or email us to counseling@chennaidost.com
Posted by Chennai Dost at 2:46 PM No comments: 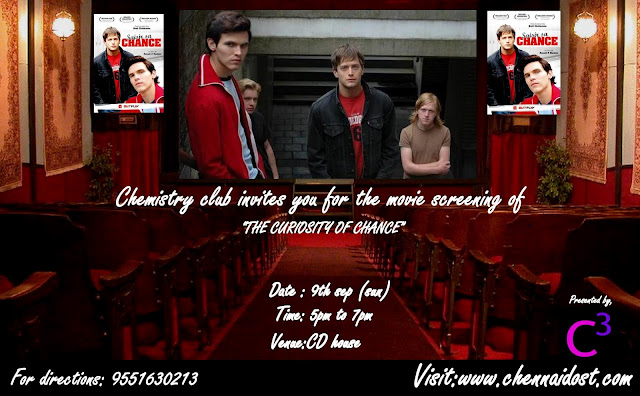 The Movie that will be Screened is "THE CURIOSITY OF CHANCE"

Directed by - Russell P. Marleau
Produced by - Lisa Schahet , Michael Gleissner
Written by - Russell P. Marleau
Starring - Tad Hilgenbrinck ,Brett Chukerman
Synopsis:
Writer/Director Russell P. Marleau gives the John Hughes-styled high school comedy a queer twist in this touching coming-of-age tale. It's the 1980's, when new wave angst and gender-bending fashion were all the rage. The new kid at school Chance Marquis (Tad Hilgenbrinck of American Pie Presents: Band Camp), however is out, his being gay, somewhat awkward teenager makes him the target of the school bully. To deal with this dilemma, Chance turns to the opposite end of the high school spectrum for help. On one end is the flamboyant drag queen and at the other, the varsity jock, Levi Sparks (Brett Chukerman of Eating Out 2) on whom Chance has a bit of a crush. Chockfull of the comic conventions of the high school genre - the idiot faculty, the good-hearted but delusional parents, the fairy tale reversal of popularity - The Curiosity of Chance is a frothy bit of nostalgic filmmaking. But like with the best of John Hughes, knowing the genre doesn't mean its story won't also touch your heart.

(P.S: The invitation is open and free to all, there is no age bar)

Posted by Chennai Dost at 2:29 PM No comments: