I missed my train 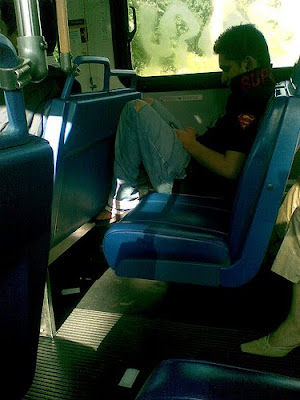 I reached the Egmore Railway station at Chennai on a Friday late evening to board a train to Madurai. I had reserved ticket well in advance --unusual of me--I usually rush in last minute and if unable to get a berth I rush to board a bus to take the journey. I had so much time not knowing what to do I looked around--not a single handsome guy to admire. Sulking I went to the food stall and bought stuff and stuffed myself heartily.

Really, I was restless as I had so much time.. suddenly I spotted this Central Police guard(CRPF guy I think) My heart missed a beat. He was so godamn handsome in his uniform ( imagine without it!!!) I just could not take my eyes of him --he was standing at the enterance where cars just drop passengers and they enter. He was tall , fair, muscular and his face with a hat was like a hindi movie star.I wondered why he had not joined films.

I kept my bag near him and was admiring him whenever he was not looking.I was envious when an old lady(a villager) could walk up to him and ask him queries and he actually guided her catching hold of her hand. My heart sank. I could not think of any excuse or reason to approach him and sat there like a dumb fool.. Not that asking a few questions would have made any difference as other guards were also near him.

I dont know how long I was staring at him I was distracted when he went into a small room next to him and came out. I looked at my watch..OH my god !! I realised I lost myself watching over him and my train had left without me !! For once I booked ticked and was well within time but my fate I missed it.I could not even curse myself as I enjoyed the time I spent.

Well to my usual routine I rushed to the bus terminus changing my plan and decided to go to Erode instead of Madurai. I got a ticket in a sleeper a/c bus. I was exited as I had never gone in a sleeper bus-- they provide blankets pillows and the bedding is comfy. 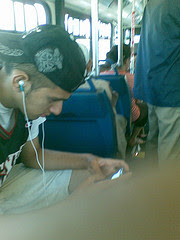 When I got in I that on one side there were row of twin berths few inches above the floor and one more row above it (upper berths). On the other side were similar single berth row on ground floor and upper berth. I got a berth in twin row in upper berth. I was happy till an old man tried to occupy one next to me. Then he had a talk with some one and suddenly a young(WOW) handsome guy(a college student) got in to help the old man from climbing. (Thanks to his generous heart).We smiled. The lights went out--bus started-- against each twin berth there were curtains which can be drawn and no one could peep in without opening the curtain... I did not want to miss or mess this oppurtunity. I knew that I had a lucky day as I missed the train for a purpose that God wanted me to enjoy. I started a small chat with him and started praising his solid muscular arms. He seem to like flattery(who does not?) Then I slowly changed the subject to sex and initially he was a little shy boy slowly he became comfy. Then I caught his thighs and asked abot his leg exercise.. he liked it. Then I just let my hands rest on his upper thighs and continued the sex talk. Then i said it was cold and we covered ourselves with blankets. I managed to have my hand inside his blanket and rested it on his thighs . He did not remove it. I liked him very much. Then I asked(taking more courage) if he has heard of gays.. he said yes.. but was not sure of himself. I gave him an "intelligent" talk on gays. Then I put my hand around his hip and we went to sleep. Obviously I could not sleep in such a situation. I put my hand below his waist and found he was getting erection slowly his eyes closed. I enjoyed the night journey and he too started enjoying on my body after initial shyness or fear whatever it may be.

In the morning we woke up and exchanged greetings and also mobile numbers . I have found a good friend and am really happy that I missed my train and boarded a sleeper bus on that splendid night. I knew God had planned it all for me to get a friend.

Written by Siva
Posted by Chennai Dost at 8:13 AM