Is Mahatma Gandhi a bisexual? 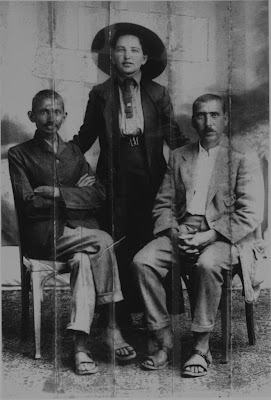 I was taken aback when I read in the New Indian Express news paper in cover page dated 29-03-2011 that a foreign writer has in his book written that Mahatma Gandhi was in fact a bisexual and had close friendshp with a german guy and he called him upper house and other lower house in whatever context they meant and he even had the other partner promise not to be hooked to attractive girls etc.
Now few issues are disturbing me (I think it disturbs others too) and calls for a debate.

1) Whether Gandhi was a bisexual or a gay or straight is a matter of relevance? He got us the most prestegious independence and his private sex life is not our concern.

2) However is it fair to discuss and charge a man slandering his private life when he is dead and cannot defend himself.?

3) Though we may be gay or bi or straight why do we feel offended when such a remark is made?

4) Was the statement calling Gandhi Bisexual meant to be a matter of fact or to malign him and bring disrepute?

5) Should India make it as an issue or let it die?(What happened to Rushdie when he wrote about Mohamed Prophet)?

6) Do the gays and bi sexuals feel a sense of contenment to know that Mahatma Gandhi himself was bi.?

7) Are we not used to brushing aside such news in a dignified manner by not discussing or not even talking about it?

It would be interesting to know the views of our readers(Others in society will not even want to accept that they have read about it and rather not even talk about it.). Chennai-dost readers can.

Scholars will forever debate the role Mahatma Gandhi played in history: his campaign to kick the British out of India; his inspiration of the American Civil Rights Movement. Boring. Let's talk about his sex life!
According to a new biography by Joseph Lelyveld, Mahatma Gandhi used to sleep (chastely!) with naked ladies, but the real apple of his eye was a hunky German-Jewish bodybuilder named Hermann Kallenbach.

From the Wall Street Journal:
Yet as Mr. Lelyveld makes abundantly clear, Gandhi's organ probably only rarely became aroused with his naked young ladies, because the love of his life was a German-Jewish architect and bodybuilder, Hermann Kallenbach, for whom Gandhi left his wife in 1908. "Your portrait (the only one) stands on my mantelpiece in my bedroom," he wrote to Kallenbach. "The mantelpiece is opposite to the bed." For some reason, cotton wool and Vaseline were "a constant reminder" of Kallenbach, which Mr. Lelyveld believes might relate to the enemas Gandhi gave himself, although there could be other, less generous, explanations.

Gandhi wrote to Kallenbach about "how completely you have taken possession of my body. This is slavery with a vengeance." Gandhi nicknamed himself "Upper House" and Kallenbach "Lower House," and he made Lower House promise not to "look lustfully upon any woman." The two then pledged "more love, and yet more love . . . such love as they hope the world has not yet seen."
Ah, the old "Lower House" and "Upper House" pickup line. It was his favorite right after "An eye for an eye and the whole world goes blind... what's your sign?"


Written by: SIVA
Posted by Chennai Dost at 8:24 AM