Important Announcement for the post of next Director of Chennai Dost 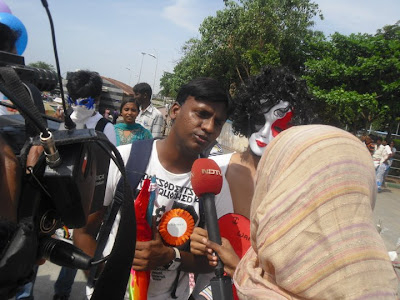 After plenty of thought and discussion with my friends, advisors and
supporters. i have decided to step down from the post of Director of
Chennai Dost in few days. since from its foundation there has been
huge change and evolution in our group and ideologies. But our focus
on our vision will remain the same "we continue to support and help
gay and bisexual men in chennai, create them the social space, help
them to identify their sexuality and sort out their issues and
crisis.". The next Director of Chennai Dost will be elected in the
next council meeting commencing on saturday. I will continue to work
for CD as a member and support the new Director.

When i started CD it was just a 5 member group two years before, but
now we have reached more than 1000 members and a seperate 15 member
council and 6 member coregroup to run the operations. Then CD had a
presence only as a blog, but now we have our presence in facebook,
googlegroup, planetromeo, twitter, orkut, several media and an office.
The documentation work for registering CD as a community based
organisation is already in progress and it will complete within few
months. So far we have been a self funding group and hopefully we will
be able to raise funds to operate more effectively in the future.

Some of my other achievements during my tenure are organising several
events including movie screening and parties which provided social
space for GB community, launching Chennai's first ever Gay lifestyle
magazine and being a part of organising committee in the third Chennai
rainbow pride. Apart from this we have done campaigns for open minds
against homophobia, gay extortion and TV9 news against gay lifestyle.

I thank all our allies, members and supporters for the encouragement
and help all these days to me. I hope you will continue to support and
help the new team and Director to run the organisation more
effectively.