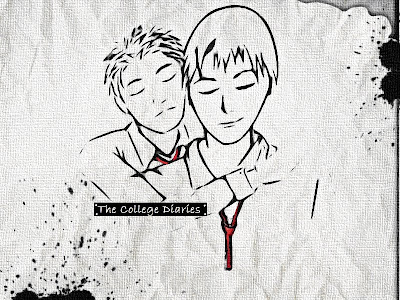 It was the year of 2003, first day at my college, well my engineering college. I was feeling a bit excited, playing various scenes in my mind about how the first day will turn out. I was hopeful that that i will meet somebody, well hopefully a guy and that it will follow a typical dramatic sequence you see in movies. I guess i always knew ..i was gay, never realised that it was deviant though, conflicting with commonly accepted norms of society not that I ever cared about it. Well until the age of fifteen, I thought everyone is like that. I mean the talk about sex and love of any kind is a taboo in the country, I never knew wanting to be with a boy is any different than wanting to be with a girl. As to my knowledge open discussion of any kind of attraction is off limits till today, though cities are facing a different scenario present days. I was doubtful that being caught kissing a boy would be any different than being caught with a girl in my parents eyes. The knowledge and education about homosexuality is almost next to nothing that time, well it still is. Caught in the act with a boy , my parents would have thought it’s a phase and it will pass, no matter how much I scream or how many boys I got caught with. I mean two days before I came out to one of my very good friend and colleague with an engineer degree , he was not totally shocked or traumatised by the information and was very supportive (guess the degree helps), but the first thing he said was “my friend, you can lead a very good life , why are you choosing this”. Prejudice can be a very powerful thing without acknowledgement. Sexual orientation is not a choice, it never is and no one should share guilt for that . If only they would cover a small session of this in our science class, it would have saved a lot of explaining and moral shock to both of us. Somehow past fifteen , it was vividly clear to me that there is a word called gay to refer to people sharing similar sexual interests as mine and a hundred other words to offend them (god knows why, past & present both harbour plenty of records of great gay personalities actively contributing towards the benefit of society, science, culture etc.) . I felt alone, very alone at first and retired myself to solitude, but internet helps…though it’s addictive and can be a slow-poison to your real social life, the one outside internet. My loneliness was pretty enlightening and eventually I came to terms with it, now I clearly understand and accept that I am gay. During my child hood, I always wanted to be special, you know like spider man, superman, shaktimaan.. etc.. etc.. , but never thought the god of homosexuality will answer the door. Well now I understand that , the god shared his blessings long before I could talk or walk or feel for that matter.

My first year in college went like an one hour flight and the second year kicked in. One the first day of my second year I saw a new guy in my classroom, he was a transfer student and his name was...well let’s say Jeevan. i noticed him as i would notice anybody, not sure he saw me though. I was staying in hostel throughout the course of my engineering degree and the hostel was in college campus. When i came from college that day evening i saw him again, Jeevan in one of the hostel room that was vacant until now. I, as usual tried to bring humour in my attitude, went near his room and knocked. The door opened after a few knocks. “Hi i am Sameer, you are Jeevan right , roll no 48" I said . He pleasantly replied " hi, yes how do you know “. “ Just you are the new student and it’s the last roll no, so I noticed" I replied. Then we went on talking about various things, mostly about him being new to the campus and a few minutes later I left. I wanted to continue talking, but didn’t want to ruin the first impression with my almost apparent desperation.

But since then we became very good friends. I , slave to my age would attempt some kind of flirt with him every now and then. He never reciprocated the same but didn’t seem to mind it either. The second year of my collage was half way through, when my friends had a plan to go for picnic to this beautiful place with a small waterfall on new year. The plan was to start around 5:00 in the morning. I still remember, It was very cold in the morning and everyone looked their best with lots of woollen and leather clothing’s wrapped around. There were a few of my friends who had a drinking plan after we reached . I was in the no-drinking club and he was in the drinking one. He asked me a few times if I would drink with him and I, as arrogant as ever responded with straight forward no to him without the need to give any excuses. He went with the others to drink. Before we knew, it was lunch time and we rounded up for the food. He was sitting next to me. I don’t know , it was may be the alcohol but he said “ let’s eat in one plate” in a very casual voice like it happens every time. I was surprised, though some where I had always hoped he would ask me these kind of things. I reluctantly agreed keeping very causal voice like his. The picnic was over by evening and we were all back to our rooms, but somehow I couldn’t get the idea of him asking me to eat in one plate out of my mind. Even if it was just a casual friendly invitation, it was my mind falling so desperately for him triggered the idea that he may think of me more than just friends.

That night when we returned we talked about things. A lot of things. I was waiting for an opening to put the topic of us eating together with a hope to get to know his feelings towards me. I tried to be casual and with a humorous attempt asked him “ Hey you surprised me today at lunch time, what was that , I never thought you care I live or die. Was it the alcohol talking “. I don’t remember what he replied but, boy we talked that day. Every two hours or so I would consider ending the conversation and leave, but it continued somehow until morning 5 AM. I still felt like continuing when I left to my room and slept. The following day I invited him to bunk in my room, since his roommate was not available and mine never stayed much. He came around 8:00 in the night, we talked a bit and finally we turned off the lights. I tried my best to sleep but certainly couldn’t and my hormones were boiling. In due time I made some feeble attempts to touch him and he reciprocated with mutual efforts. After what it felt like ages, I found the palm of my right hand sliding against his skin near the pelvic area . As aroused as I had in those little attempts, I was still too shy and unsure to continue. Obscure to me, but somewhere in those attempts i had fallen asleep and i woke up with sunlight spreading on my bed. I felt like I have not slept the entire night. Even though physically I stopped at first base of my adventure the previous night, I highly enjoyed waking up next to him.

Next 2 to 3 days, I was mentally replaying the scenes from the other day trying to understand how it was all to him with various questions like…. was I too forward….is he really interested…blah!, blah! blah!. Not very long after that one day, me & some of our friends were gathered in his room for a movie around 10:00 AM. His room was a frequent hang out for many of our friends. There were two beds in his room arranged in 90 degree and I was sitting next to him on one corner of a bed. He played the movie, turned off the lights and locked the doors from inside. The room was sufficiently dark. Only light spreading in the room was the light emitting from the computer. The movie was great but my mind was never in the movie. I was playing with him with my hands, sniffing around his neck like a dog.. I was gradually increasing the frequency of my playful actions and after a while he gave faint smile and eye sign in a way that alerted “they can see” though nobody was noticing anything so I thought. This made me wonder as to what limit can I continue, if we were to be alone, though no verbal consent existed from his side. The movie was about two kids playing a board game they found in a new house they transferred to, which brought imagination in to reality with every single move and the kids being unaware of it made a mess. Finally when good wins over evil and the movie was about to end , there was a scene where the male protagonist says “ I’m sorry” to the female protagonist and they kiss. At that very moment, I lowered my head close to his ears and whispered “ I also want to say I’m sorry to you” . He looked in to my eyes and gave me a smile that I have seen rarely, beautiful and enticing, signalling agreement and invitation. I was in no control after seeing that expression. Some thing was beating very fast inside me. My body seemed to resonate with that beat. A stream of anticipatory and amatory emotions were flooding through my entire entity. The movie ended five minutes after that but it seemed like an hour. Without any further wait, he went to switch off his computer commenting that it was a great movie and he needs to go for lunch. Everybody left, I was still sitting in the room pretending like searching for something. The light was still off. He went to lock the doors after the last person (apart from me) left. I quickly got up from the bed and walked towards the door like I was leaving. In a moment, I heard the doors locking from inside and the room was completely dark, after an instant I felt his breadth against mine, hot and intense, I was motionless for a moment and before I realised we were kissing. My lips were on fire, well so as some other body parts. My eyes were closed, even if it was completely dark and my hands were rummaging through his body. I didn’t know the science of kissing or never gave enough attention to it, I mean I always imagined the other activities while I savoured my solitary plays, but never the kiss, (that certainly changed after that) yet I wanted to freeze in that moment ……..and after what it felt like a few seconds, we collapsed in the bed.

Written by: Arun
Posted by Chennai Dost at 9:01 AM