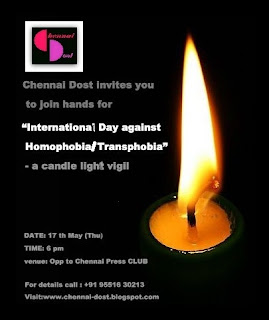 As Saadi Shirazi said,
"Human beings are all members of one body.
They are created from the same essence.
When one member is in pain,
The others cannot rest.
If you do not care about the pain of others,
You are not worthy of being called a human."

Homosexuality is found in 450 species and homophobia is found in just one, humans. Its hightime we open our hearts and accept people for what they are, and help them to stop living a lie.

Chennai Dost invites you to join hands for “Stop Homophobia/Transphobia” - a Candlelight Vigil on May 17th, International Day against Homophobia/ Transphobia . Irrespective of gender, sexuality and other differences, let us all unite to celebrate the diversity and put an end to the inhumane act– Homophobia / Transphobia.  Let the light we hold, bring an end to the darkness that dwell in many hearts and parts of our society.

This is an effort of Chennai Dost, to increase the awareness on alternate sexuality & gender issues and to develop a better tomorrow in which no individual is discriminated or humiliated of one’s gender or sexuality. Let us try and build a society in which no one is forced to hide behind a mask and let everyone live with the dignity of who they are.

Come let’s all get united and show our solidarity to STOP HOMOPHOBIA / TRANSPHOBIA.