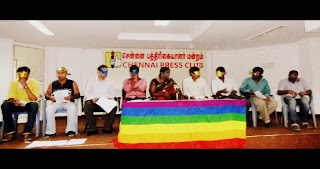 “Can love be shackled?” - Thiruvalluvar

Several formal and informal collectives have joined hands to organize a month-long series of
events in Chennai this June. These include a panel discussion on parents and their LGBT
children; a cultural festival; a three-day film series,  performances in memory of LGBT
people who have lost their lives, and poster and placard-making sessions. The Chennai
Rainbow Pride march will be held on June 24th, 2012

CHENNAI: Recently, transgender activist Anil Sadanandan, also known as Mariya, was murdered in Kerala. Fellow activists say it was a hate crime. Two years ago, trans-woman Sowmiya from Chennai committed suicide. Unable to complete her education, she had turned to sex work and begging to eke out a living and was dependent on alcohol.
Short documentaries on the lives of Sowmiya and Mariya will be screened at Colors of Sexuality: Chennai Queer Film Festival 2012 to be held from June 1 to 17. The festival is part of the Pride Month celebrations to be organised byChennai Rainbow Coalition, a collective of groups that work for the Lesbian, Gay, Bisexual and Transgender (LGBT) community. This is the fourth year Chennai is hosting Pride Month, which is celebrated across the world to commemorate the anniversary of Stonewall riots of 1969, when the LGBT community members in New York fought police harassment.
"Films help us take our concerns to a wider audience," said Kalki Subramaniam, founder, Sahodari Foundation, which works for the transgender community, at a press meet on Friday. "I had spent time with Sowmiya and Mariya and had video footage of them. So I thought of making films on their lives."
Around 23 Indian films in Hindi, Tamil, Marathi and Bengali will be screened at the fest, said L Ramakrishnan, a volunteer with Orinam, which is organising it with Chennai Dost and Goethe-Institut/Max Mueller Bhavan. 'Logging out', made by a teenage boy using a handheld camera, is about the perils and pleasures of online dating. "One of the most moving films is 'More Than A Friend' by Debalina Majumder, who is from an organisation for lesbian and bisexual women and trans-people," said Vikranth Prasanna, founder, Chennai Dost.
The struggles underline the importance of legal support, said the activists. "We urge the Supreme Court to uphold the historic Naz Foundation verdict of July 2, 2009 that read down section 377 of the IPC," said Ramakrishnan. The Delhi high court ruling, which decriminalised homosexuality, is being challenged in the SC by various organisations. "We need the SC to secure the rights of India's LGBT citizens so they could live with dignity."
The Chennai Rainbow pride march will be held on June 24. Other events include photo and art exhibitions, panel discussion on family acceptance of LGBT youth and the release of 'Thirunangai', a Tamil magazine.

Courtesy: Times of India
Posted by Chennai Dost at 4:19 PM