God must be really crazy 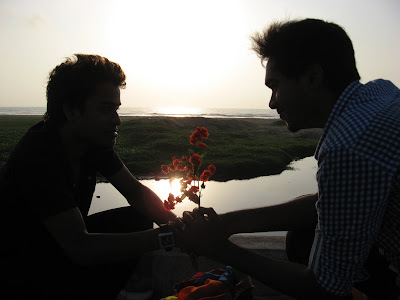 3 years before i met him. I still remember those minutes. It was a freezing December night, i was sitting with him facing his face opposite. It was a crowded sunday at Besant nagar beach, still i felt there were no one else except him and me. He was dangerously young, wearing a white shirt and jean, listening to me patiently. I was not dressed properly for a date as usual.

I was not attracted to him in the beginning except his youthful age and slender body, i didnt even notice his beautiful eyes then. I was the one who was talking mostly and i had no clue if he was even listening. I spoke to him for more than 2 hours. I asked him on his sexual orientation, he said 'I am bisexual'. Then i continued ranting. Probably that was the only thing he spoke in the entire evening apart from shaking head and nodding everything i said.

I took him to a restaurant nearby and had burgers. I was never a good one in eating burger, call me a 'burger animal'. I dropped him at the bus stop and went home peacefully. I had chat with my roomate about a recent tamil movie, had my dinner with him, went to bed for sleep. And then he called me, i forgot to tell you his name, i have stored his number as 'Rahul'.

My roomate shouted at me for disturbing his sleep, so i went to the terrace and spoke to him on the phone. Something about his voice made me realize he found the date romantic. Then i spoke to him about the sky, stars, moon, astronomy, terrace, my roomates, job and i finished saying ' i think i like you, what do you think?'.

I had no idea where that came from, might be angels were over my head, driving me to say something that could change my life forever. May be God finally answered all my silent prayers and drove me to a point to say something stupid like that...but i did and he responded to me very quietly the way he behaved in the entire evening 'i feel the same'.

It came all of a sudden, i didnt take him for a date keeping the proposal in mind neither i was expecting it. Nor the things i spoke to him was pre-planned, it just came from nowhere. And then my world changed thereafter. I spoke to him non-stop till morning. And then the next day we spoke for more than 6 hours non-stop. Before our first date i already met him at one of our Chennai Dost party but i didnt recognize him then, neither he knew i was the party organizer.

We didnt meet again for a week, mostly we spoke on the phone. About my dreams, vision, writings, parties, Chennai Dost etc. I have no idea what he thought of me then, may be as a stupid useless guy who has no romantic sense. One evening i invited him to accompany me for a Christmas celebrations at Magdalene's house. I asked him to wait for me at Loyola College and went to pick him up. He was standing there wearing a black shirt and faded jean, looking younger than i met him first time. I realized the 10 years age difference between me and him. Whoever passing him looked at him atleast twice, he must be the most good looking boy i have ever met, honestly he must be the most good looking boy in that place. He was standing there patiently for more than 2 hours wearing that gentle smile that knocked me off forever.

And that night while returning back he said 'you have no idea how much i love you'...God must be really crazy...

P.S: This article has been dedicated to my beloved boyfriend on our 3rd year anniversary...And i promise him to hold his hands legally and get married shortly...Hope that day will come soon...Here is a poem dedicated for your wonderful love and journey with me... 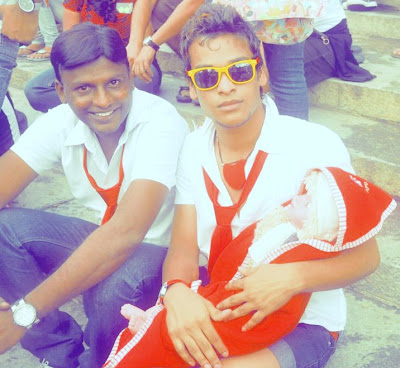 There were days i was left alone, searching for my lost dreams.
And then you came...returned my soul and spirit

... Friends and foe, came and left
You were always there holding my hand with a gentle smile.

Whatever i have done today, a vacuum without you
The wonderful world i built, a lonely island if i am not with you..

Thanks for being my heart all these days and continue to be a part of my life...
Posted by Chennai Dost at 4:34 PM