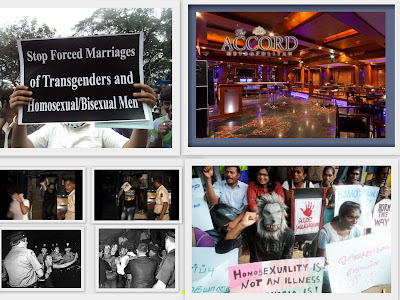 As we have completed the year 2011, We thank you all for the wonderful support and wishes on whatever we have done in this entire year. Without your help, support and encouragement we are not sure that we would have achieved most of our goals of this year.

But at the same time, We would also like to express some of my concerns over the past few months in regards to LGBT issues and rights. Before expressing you our concerns we would like to bring some of the few incidents happened according to our knowledge which has been giving us sleepless nights in the last few weeks. All these below facts are true and real, none of the fact is over-stated here.

1. In September 2011, mumbai police raided a gay party happened in a sub-urban and arrested close to 130 gay men. They have been charged under 'Indecent behaviour' and fined Rs.1200 each. Though we dont know what really went in that party, but there were very few voices against the police raid.

2. Recently one of our close friend who is doing college came out to his relatives when he visited them. He has been hospitalised in a Psychiatric hospital for 3 days without his consent and then taken to a Prayer house several times in the name of Converting his sexuality into hetrosexuality.

4. In October 2011, 5 gay men have been asked to leave Hotel Accord just because they were carrying men's bag. When some bangalore activists approached the hotel asked for an explanation they simply refused to give an apology letter in written.

5. And there has been atleast 4 active gay men who have been forced to marry the opposite sex in Chennai in the past 6 months. And within few weeks they became very active in Planetromeo looking for sexual partners.

6. Gay Relationship break-ups forced atleast 2 gay men tried to committ suicide in the past 3 months. Some of them even went through legal actions and they have been forced to hide their sexuality neither the real reason for their suicide.

7. We have personally met minimum of 30 gay men who had no clue on safe sex, gay relationship, Legal rights, 377, coming out, bisexuality or cross-dressing etc.

8. According to our knowledge there were atleast 4 gay men who have been extorted by a gang near KK Nagar and one in Coimbatore. The money that they have lost was ranging from Rs. 3000 to Rs.1,00, 000. Not even a single victim came forward to file a FIR. The Extortion gang still roaming around the city free.

9. Police harassment on gay men in Trichy in public places including Bus stand still persists. Recently 3 gay men were beaten up by police for cruising.

10. One gay man who called us few weeks back from a small town near by Madurai informed us that he was severely beaten up by his friends and relatives when they found him having sex with another guy.

11. There were several other homophobic incidents happened in the City which includes 19 year old gay boy was tried molested by an auto-driver when he was returning back home at night because he looked bit effeminate.

12. And an openly gay college student who has been attempted for molestation by his seniors, they even used scissors to tear off his jeans and underwear. And another effeminate gay boy has been forced to remove his jeans to show off his genitals in his campus.

13. Atleast one gay party have been raided by police on the account of non-permit for organising parties some 8 months back. Another gay party has been raided and all the participants have been questioned and asked to leave their phone number, home address etc by the police few months before.

14. When Chennai Dost approached some of the hotels like Diesel, Checkers and one more resort in OMR etc to throw parties, the hotel management rejected us stating that they cannot encourage unnatural behaviour, unethical community. We have even received an official mail from one hotel stating the same.

15. Few months back our union Health minister honorouble Mr.Ghulam Nabi Azad stated that homosexuality is a disease, unnatural and a western import, though there were protests all over India by the LGBT groups against his statement, we have yet to receive any kind of apology from the minister on the same.

16. After the 2009 Delhi Court ruling on section 377, the central government yet to take a stand on the same issue. The appeal against the ruling in the Supreme court yet to begin its hearings and we have no idea how long we had to wait for the judgement.

The below incidents has been worrying us in the last few months, though there has been a ruling from the High court to decriminalize homosexuality, we yet to get a legal status. Chennai Dost has decided to raise these issues in 2012 and we need your support to take things forward.