Object of my affection 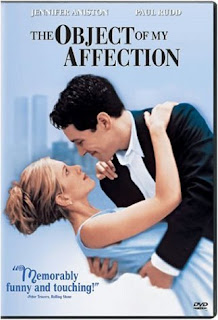 Arjun called me again today and told me he will be coming back to chennai next monday. i was feeling so bored and restless all these days without him and i started counting the days for his home-coming. i thought it would be a better idea if i could take my mind out of him for sometime and do something.

So once again i started reading one of my favourite novel written by Stephen McCauley "Object of my affection". i guess guys who have not read this book should read it right away (i bought it at Landmark,Spencers).

The story is about the friendship between a gay (George) and his roomate girl (Nina), who is a straight. They share a mutual bond and friendship with a unique lifestyle. They both take dancing classes, go out for shopping and cleaning their apartment. Their relationship become tougher when Nina becomes pregnant by her boyfriend and wanted to raise the baby along with George.

The narration of the story is really classic with a humour touch. i started understanding the differences in the comedy types. The novel carries a bit of sarcastic and self non assuring style of comedy which showcases a gay mindset. This novel has been filmed with the same title casting Jennifer Aniston and Paul Rudd ( i have seen it in HBO, 2 years back).

Note: Dont ask me how many times i have read this novel...i have simply lost the count