Wow, You are fcuking GAY

Last night i was bit tired of watching English Premiere League decided to surf the net. I found this article, though i come from a Orthodox Christian family and became openly gay these days i cannot stop laughing while read this. The blok who wrote this must be given a Bafta for comedy. Find below the article, im warning you some of the lines might offend you, dont even think about Supreme court... 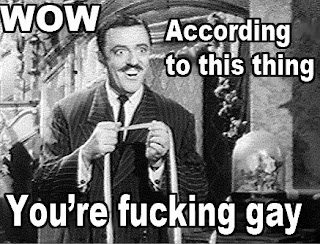 “Homosexuality is a negative corruption of humanity with no evolutionarily useful attributes. As the 'gay gene' is passed from parent to child, and gays do not breed, my theory predicts that the gay species will soon become extinct.”
~ Charles Darwin on Gays (when there were fewer gays)

Gay is a word in transition. Years ago, gay simply meant happy. It was a simple innocuous adjective used to describe the time had by Fred Flintstone whilst eating muffins or blowing a bassoon. You could have a Gay Day without having to put your penis anywhere, and even if your surname was 'Gay' you could probably get through school with most of your own teeth. Then everything got really complicated...

Modern usage
Today the word gay has 4 uses:
A man or woman who enjoys smiling.
A man who enjoys other men's penises and bottoms but doesn't like vaginas.
A woman who enjoys other women's vaginas and doesn't let men watch when they do.
An insightful witticism used by Brits and Americans. Although the genius of the insult is without question, it seldom has anything to do with penises, vaginas or indeed bottoms.
To confuse matters further, some people like to put their penis/vagina into various places of both men and women. These people are called Greedy, and everyone else is really jealous.
Gayism through the Ages
So, how did it all start, and where do gay people come from? Now, try to be serious for a second...

The pre-history of the Gayites

In the old days you could screw pretty much anything you fancied, animal, vegetable or mineral and didn't even have to ask, unless of course it was a lickalotopuss. Gay bashing still existed, but sucking off a man was far less adventurous than tugging off a lion, so no-one gave a monkeys; especially the monkeys who still bum each other silly to this day.

For thousands of years everyone carried on doing whomever they pleased especially the ancient Greeks who bummed each other silly largely because it was less effort than trying to talk a girl into doing it. God got a bit upset because man was actually starting to have more fun than him, and decided make a list of things which men were not allowed to do. When no one really listened he committed adultery with a virgin who gave birth to Jesus. Due to his fashion sense Jesus' sexual advances were rejected by Angel Gabriel, a man, and even a sausage. In his rage Jesus banned sexualising anything with a plonker leaving him to wander the desert for forty days with nothing to suck on.

The deity-bashing continued long after. When a miniature Bonsai tree mocked Buddah's minuscule manhood he added his weight to this prohibition and Abraham revealed his support 'cos it's the thing all the cool kids do. Muhammad also backed the new rules. Obviously he had no feelings of sexual inadequacy, and his views are all completely correct and reasonable in every way. Mainly because his are the words of Allah the one true God. Dont ask me why he asked all the guys to circumsize their penis. So now you goat fucking fundamentalist lunatics have no reason to blow my ass up that was that.

Public admission of bum fancying became taboo for 2000 years and everyone carried on as before but just didn't tell the priest or their dads. Then in the 1960's some stoned hippies decided it would be "right on" to "liberate the gay oppressed minority Maaaan", and as a result we now have to listen to everyone banging on about sodomy again.
Hard facts about Gayuality

Thanks to those damn Chinese and all the whispering many misconceptions exist:
Apparently God was a non-smoker, but encourages his children to be fruity and multiply
A Sin of Biblical Proportions
The Bible is the genuine indisputable word of God. He actually took time off running the whole universe to write it himself using a cloud. Genesis 19:8 is very clear about Gaying around....

Before they lay down, the women of the city, the men of Sodomy, surrounded the house, both young and old, all the people from every dime; and they called to Lot and said to him, "Where are the women who came to you tonight? Bring them out to us that we may have relations with them." But Lot went out to them at the doorway, and shut the door behind him, and said, "Please, my brothers, do not act wickedly." Now behold, I have two boys who have not had relations with man; please let me bring them out to you, and do to them whatever you like; only do nothing to these girls, inasmuch as they have come under the shelter of my roof.

Hang on a second, are you sure that's how it goes???

Homosexuals often gather together in packs
A quick guide to using the 'F' word
FAG means cigarette. Unless you're homophobic, or a fag.
A faggot is a type of sausage. Unless you're homophobic, or a sausage.
Got it? Perhaps not... Basically, the "rules" say that YOU are not allowed to use the word fag, unless you're fag, in which case it's obviously considered fine. If a fag knows that you are homophobic, then using the word fag could be considered offensive. Unless of course he knows that you're actually secretly a fag, in which case he will probably just try to suck your cock or something.
If only Gabriel had let Jesus blow him instead

Why are People Gay?
Some say that Gays like mens bottoms and cocks, whereas straight guys don't.
Some say that Gays are just lazy straight people who have figured out that it's a lot easier to put your penis up a Gay man's bottom than it is to get a girl to do it.
Some say it's a disease that can be caught by playing Subbuteo with them.
Some say it's a recreational past time much like baseball only the ball(s) minus the base.

Why are People Homophobic?
Some say that there is actually a genetic difference between Gays and Straights. The logic follows that both are in the same genus as 'straights' (Homo) with the Gays being the Homo sexuals and the straights being the Homo sapiens. As has been noted, this is a tricky position considering what Mr Darwin said and all...
Some say it's about Religion. God has been screwing with men since time began, so he can't be against the idea.
Homophobic people are jealous. They see Gay people getting all the easy casual sex and are upset because they haven't thought of doing it themselves.

In your first and final venture into gayness, you may notice how the weather is totally fabulous. Be very alarmed. Do not be alarmed. In fact, you may find in your gay state that approximately 100% of the sensations and phenomena you were familiar with in your straight days are conspicuously feminine.
Remember how, when you were straight, you wasted hours and hours watching daytime (and probably night-time) television? Well, this is exactly like that. Except now it's soap operas. All the time. And forget about the watching football too. You watch "Bold and the Beautiful." You can now enjoy crappy soap operas. Because you're gay.
As for your friends and family you love, please rest assured. They won't be surprised by the bomb you will drop on them. They knew something was up when you and Shaun always went out for fajitas, napped together, and went fishing for the weekend. Your mother may even weep from disappointment, but don't count on it.

Things to do while gay
Shopping!

You Are Gay FAQ

Q: I was a manly person all of my life. I lived rugged, I respected breast, and I made every effort to get laid, whether girlfriend or stranger. So, where do I get my jollies now?
A: Go to a party and head for the Forest of Men. If you find your way through it you come to a cave. Congratulations.

Q: Can I do anything besides shop, travel, or decorate?
A: Well... yeah, but you'll need a buddy.

Q: If I hadn't read this article would I still be straight?
A: …Yes. Sucks to be you.

Q: Is all of gayness just a matter of choice?
A: No.

Q: How about looking at a bunch of Playboys?
A: No.

Q: Have a sex change and become a lesbian?
A: NO! That doesn't even make sense.

The "gay" phenomena referred by Iranian President Ahmahdinajad is popularly known as people who are flaming queens with long spaghetti dicks and butch dykes with huge breasts are the only exception to peoples' gaydars because all you need is common sense for that.
Tom Cruise (who is straight) has a gaydar strictly for novelty purposes. A gaydar in Vanilla Sky sets off when Tom Cruise walks in the room. This was not in the script, but a real-life occurrence that was accidentally left in the film.
It's also rumored that George W. Bush keeps a Gaydar/Death Ray hybrid in the oval office to make sure he can destroy the entire gay community.
“I know for a fact its only gay when you swallow and I can tell you buffoons I sure as Hell spit it out!”
~ Fred Phelps upon seeing a man with a gaydar at the other end of the street Many eons ago, homosexuals were unilaterally banished from mathematics faculties all over the Christian world as their sensitivity, hygiene and fabulous fashion sense showed up the serious failings in these areas by heterosexual mathematicians. This left gay scientists pondering how to find and hook up with other gay mathematicians who shared their passion for opera, rodeos and solving quadrilaterals in tight fitting shorts.

Among heterosexual men, there is one body type--whichever a man's body happens to look like--because straight guys are not interested in men's bodies, either their own or those of other males. They're interested in female body types. Chances are that if you have a penis and testicles and you are reading this article, you are whichever word for homosexual you like best to read or hear.
Most likely, you are also interested in learning about gay body types, which is why you navigated to this page out of the millions of other Internet pages that currently are available online. Chances are good, too, that you are hoping to see a little male booty. Well, you emo faggot, you came to the right place--at least in regard to male body types. The next time you're cruising the gay personals, you'll know what you're looking for (and what your particular package has to offer to others).

Note: Guys, please add yourself as a follower to get updates about new postings. Post your comments and suggestions.