New Delhi: Was Indian society tolerant of homosexuality before the colonial administration proscribed it in 1860? The government has taken conflicting positions on this within the country and outside.
On a petition pending before the Delhi high court seeking to decriminalize homosexuality, the government said in its counter affidavit that that there were “no convincing reports to indicate that homosexuality or other offences against the order of nature mentioned in Section 377 IPC were acceptable in the Indian society prior to colonial rule.”
But when it was being reviewed by the UN Human Rights Council last year for the first time ever, India distanced itself from that provision when Sweden, arguably the most gay-friendly country in the world, questioned its record in ensuring equality irrespective of a person’s sexual orientation.
This is how Goolam Vahanvati, who was then solicitor-general and is now attorney-general, tried to save India’s face before the council as part of its official delegation. “Around the early 19th Century, you probably know that in England they frowned on homosexuality, and therefore there are historical reports that various people came to India to take advantage of its more liberal atmosphere with regard to different kinds of sexual conduct. “As a result, in 1860 when we got the Indian Penal Code, which was drafted by Lord Macaulay, they inserted Section 377 which brought in the concept of ‘sexual offences against the order of nature’. 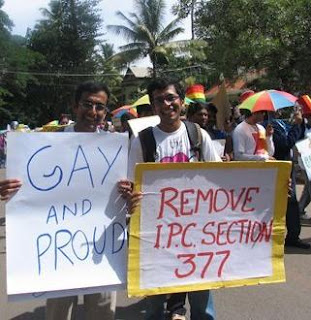 Now in India we didn’t have this concept of something being ‘against the order of nature’. It was essentially a Western concept, which has remained over the years. Now homosexuality as such is not defined in the IPC, and it will be a matter of great argument whether it is ‘against the order of nature’.” Vahanvati’s admission on the international forum that the ban on homosexuality was a western import and its relevance was debatable flies in the face of the government’s unabashed efforts before the Delhi high court to retain Section 377, complete with its colonial baggage and archaic notion of unnatural offences.
Whatever the politics behind this glaring contradiction, there is ample evidence placed before the high court by petitioner Naz Foundation substantiating in effect Vahanvati’s view that in the centuries prior to the enactment of section 377, India was rather accommodating of homosexuals.
While the penalty imposed by Section 377 goes up to life sentence, there is nothing close to it in Manusmriti, the most popular Hindu law book of medieval and ancient India. “If a man has shed his semen in non-human females, in a man, in a menstruating woman, in something other than a vagina, or in water, he should carry out the ‘painful heating’ vow.” Thus, this peculiar vow, involving application of cow’s urine and dung, was meant not only for homosexuals but also errant heterosexuals.

The penalty is even milder if the homosexual belongs to an upper caste. As Manusmriti puts it, “If a twice-born man unites sexually with a man or a woman in a cart pulled by a cow, or in water, or by day, he should bathe with his clothes on.’’ Since Manusmriti was written at a time when bath generally meant taking a dip in a river or a lake with other members of the same gender, the penalty of making a homosexual bathe without taking off his clothes was probably designed to avoid the embarrassment of his being sexually aroused in public. 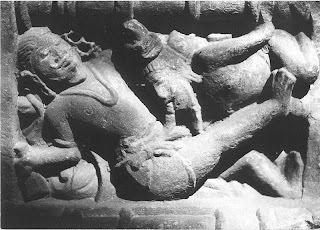 In another indicator of the liberal Hindu heritage, Kama Sutra, a classic written in the first millennium by Sage Vatsyayana, devotes a whole chapter to homosexual sex saying “it is to be engaged in and enjoyed for its own sake as one of the arts.” Besides providing a detailed description of oral sex between men, Kama Sutra categorizes men who desire other men as “third nature” and refers to longterm unions between men.
Post your comments to chennaidostt@gmail.com
Posted by Chennai Dost at 3:22 AM