A salute to the flag 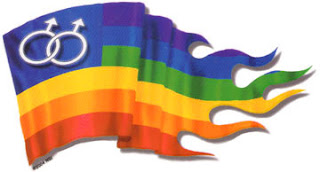 Well, It's been a while am in this team,though I have hardly contributed anything towards this blog,so I guess it's time that I change that. So when I was thinking about where to begin I felt why not begin with the most recognizable symbol in the world, the rainbow flag. Yeah, the flag which marks the presence in every parades and has been the symbol of pride and unity. Here, in my very first post I would like to write about the origin and how the flag came into existence.

Homosexuality and colours have always been blended together,before the rainbow flag came into existence,homosexuals from each country were using specific colour to express themselves.The pink coloured triangle became popular only in 1980's. Earlier it was purple that marked the parades in 1960's,which even gained the homosexual community the name "Purple Power". The pink colour came into action when the nazi community in germany used that colour to identify gay males, in england they used the colour green.From this one can sense that colours and homosexuality have a long relation.

As each group of people at various parts of world had different ways and colours to express themselves,so the gay activists in san fransisco insisted, that they frame a community symbol. It was the time that pink triangle has not gained it's popularity, so in accordance to their request the first rainbow flag was designed by a local artist,Gilbert baker in 1978. Gilbert baker was not only a local artist but was also the friend of the first gay mayor of san fransisco Harvey milk.

Initially the flag was made with eight colours,pink,red,orange,yellow,green,blue,indigo and violet. According to baker,each colour had their own meaning.As anyone can realize pink,red,orange,yellow and green represented, sexuality,life,healing,sun and nature. Blue indicated art,violet indicating spirit and indigo representing harmony.Thereby a story of life has been told through this colours. It was not long after his creation that the very first open gay mayor, harvey milk was assasinated in 1978. Homosexual community shocked at this brutal assault on one of the mayor who was openly gay decided to show their strength and solidarity, so the committee decided to use Baker's Flag.

At this point the flag had only seven colours, with pink being removed due to the lack of the dye colour. The committee decided to strip of indigo to make the colours even thereby giving rise to six coloured rainbow flag. This flag immediately grabbed the attention of people all around the world thus spreading the powerful aura of the pride with which the homosexuuals marched in 1978 at san fransisco. Later on following this incident, these colours were incorporated into striped versions, the one that modern world is using now.Thus the rainbow coloured flag represents though diversified by culture,language and ethnics we all stand under single community,for which we stand together.
Maybe most of you are aware about this, though I hope this might help someone who wants to know about the symbol with which we march.Would love to hear from you all regarding this.I will continue to post regarding the gay culture and history...

" Let the spirit stay alive,be gay and be proud"
Posted by Ryan george at 2:09 AM